By day, Steph Towns is Sixth Form Guidance Tutor and School Careers Coordinator at Whitley Bay High School but by night she has a secret life as a champion athlete. Steph shares an insight into her life as an ice hockey player with us:

“I have played ice hockey since the age of 7 as it runs in my family with my Dad and Uncles all being well known players within the Whitley Bay Warriors set up and across the country. I am currently the head player-coach of the Whitley Bay Beacons – Women’s ice hockey club and run an U16 junior girls team, a development team and play in the Elite league myself with the 1st team.

I will travel to Jaca, Spain to compete at the Women’s World Championships Division 2A 3-8th April and will match up against Chinese Taipei, Latvia, Spain and Mexico. Pressure will be on to win a gold medal as this will mean promotion to the next division up. The World Championships have been cancelled the last 2 years due to the pandemic, and last time we competed we won Silver beating Korea 2-1, narrowly missing out on the gold medal game.

As well as this, I have also been selected for the Great Britain Ball Hockey team and am due to compete at the World Championships in Montreal, Canada at the end of June where we we will match up against USA, Canada, Slovakia, Czech Republic and Lebanon. Ball hockey is a sport many ice hockey players play in the summer, as it is literally ice hockey without the ice – see the pictures to avoid confusion with field hockey”

Steph and the team are now official world champions and gold medallists. They were unbeaten in the tournament and only conceded one goal! Huge congratulations 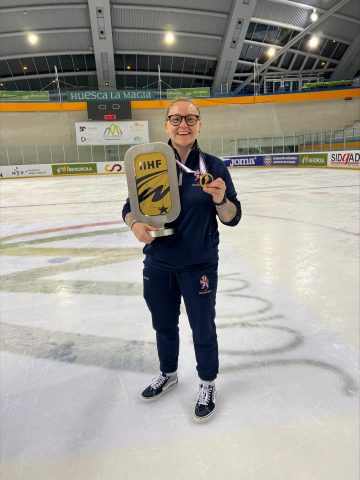